An unofficial insight on LMP1 performance by Nick Holland

I had the pleasure of spending a couple of days in the South of France at the end of last week, but it was far from a leisurely, relaxed time of late breakfasts, long lunches and stunning coastal views (although I did squeeze in a little ‘me-time’ in Sanary-sur-Mer on Saturday evening before the early Sunday flight home). No, this was all about the World Endurance Championship (WEC), the LMP1 giants awakening from their winter testing programmes and I felt the need to sample the southern French sunshine and familiarise myself with them once more.

Of course we have been inundated with pictures and tech announcements of the heavily revised models over the preceding days and weeks and both Porsche and Toyota choose The Prologue to officially launch their 2015 challengers. Amendments made to hybrid systems brought us a neat sequence of 4, 6 and for the first time 8 mega-joules being utilised by Audi, Toyota and Porsche respectively in 2015. But how much difference would that all really make ? Lets try to work through the numbers …. 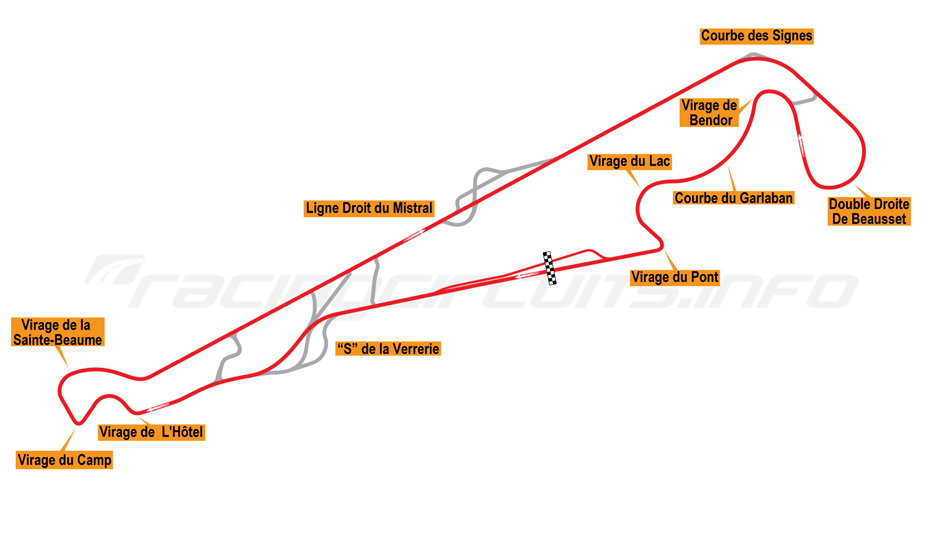 First Impressions maybe misleading, and remember it is only testing – 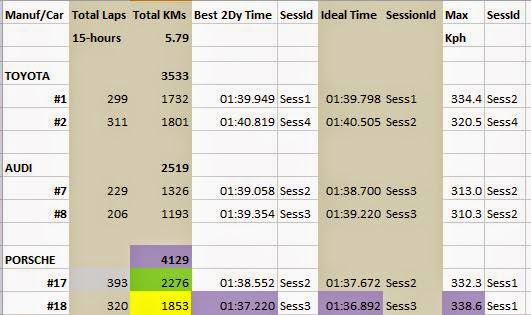 As I hope you can see, the above table shows the high-level data; between them the 6 hybrid cars covered in excess of 10,000kms in 15 hours on track. At this point I should explain the Ideal Time column, its a composite time (possibly not achieveable due to setup changes) made up of the fastest time set by that car in each sector (of which there are three as noted above).

As reported in the motoring press it would clearly appear that Porsche went further and across two cars produced the fastest times of the Test. The #18 was the only car to post a 1:36 (in the ‘night’ session) a mythical lap not seen since the thirsty, rich 900+hp days of the diesel Peugeots at Paul Ricard.

It is also significant to note on the right that the high speeds set by the Porsche 919 Hybrids (up to 338.6kph) challenged early on by the Champions in the #1 Toyota. These top speeds were set in different sessions to those of the fastest lap.

Is it that simple then, pack-up go home Porsche have this won ? Well no, as ever there is devilment in the detail. And it should be noted we may have come away not knowing all of that detail !

I hope you can read the above, and bear with me whilst I attempt to explain.

This is a by-session summary of each car’s performance (at this level ‘Platinum’ drivers are much of a much-ness in performance terms). Of each cars completed laps those that were interfered with possibly by traffic, negative weather conditions (huge Alonso-type winds in the area), pit-ins and -outs have been removed. Indeed an upper cut-off of 1:45 was imposed.

First point to note, Consistency, the ability to deliver laps below the 1:45 limit or stay out on long runs and still achieve that required pace. The %incl column on each session is the % of Total Laps included to make up the Session Average. The higher the %age the more stable the delivery platform (car).

Whilst Porsche continue to light the above table up for number of laps completed, the race pace of the Audi R18 e-tron quattro has become apparent. Even with just 4Mjs it still emerges as a very capable and drive-able platform to go to work in. Indeed in the final summation on the right of the table across all the sessions the Audi appears to emerge with a three/tenths of a second gain/lap on the Porsche.

It is clear that Toyota were not at Le Castellet to impress people, they are the champions, they know they have the best from last year, and whilst they claim 80% of the car is new, it is still a TS040 running the same level of hybrid 6Mjs. Have they been too complacent ? We just won’t know until they run in anger. Expectation must be that last year’s miss at Le Mans hurt, and hurt a lot. So let’s expect a very sharp set of car revisions for low-downforce, and more reliability runs that outright speed.

To reinforce this subliminal Audi message, deep in the data, probably wanting to be missed at the end of the 4th session on Saturday morning we find this pearl –

#7 Audi pitted with 15 mins to go in the session. Andre Lotterer stayed onboard, left the pits (I expect on fresh rubber) and delivered a stunning blow to their competitor’s data analysis. A 7-lap run at a fast but seemingly repeatable pace averaging 1:39.931 !

I’ll keep searching, but so far I have not noted a similar sequence, I look forward to some help investigating.

Below is a snippet from the final session of the two-days. It details the best sectors on the left & the session Best & Ideal laps on the right. Note Audi #7 leads in sector 1 and both #7 & #8 lead in sector 3. Yet with the long straight in sector 2 delivering a >20kph straight-line advantage to Porsche’s #17 & #18 they come out on top.

Hence a final take-away from the two-days may be that as in 2014 we potentially have two different philosophies at play. Yes, they could be running different trims/setups at that point in time. Porsche may place more emphasis on Le Mans, and Audi on the WEC, but it certainly makes for the fastest lap-on-lap game of tortoise v hare known to man!

In summary a fascinating test even if we just focus our attention on the 6 contenders in LMP1. Perhaps at Group level there is agreement between Weissach & Ingolstadt / Neuburg on how to divide the spoils… However, Toyota have reveled in their status as Champions whilst healing the wounds of Le Mans. They have sharpened their saw they know what they have and won’t be found wanting. For us, it is just 10-days until this pre-amble is superceded by true, pure, outright competition.