The Italian squad won on debut two years ago thanks to an expert performance in the rain and delivered a repeat showing this afternoon. Once again, the Dinamic crew judged the changing conditions perfectly to emerge victorious after three hours of racing. It represents back-to-back wins at the Italian track, which returned to this season’s calendar following a one-year hiatus.

The Dinamic car was not among the obvious pre-race favourites after qualifying 12th on the grid, but with Christian Engelhart, Matteo Cairoli and Klaus Bachler sharing the wheel it could not be ruled out of contention. Engelhart made excellent progress during a rain-hit first stint, which saw the field switch to Pirelli’s wet-compound tyre after heavy showers fell shortly after the start. The German ace guided his Porsche through the pack while others hit problems in the treacherous conditions, eventually handing over to Cairoli in fifth. 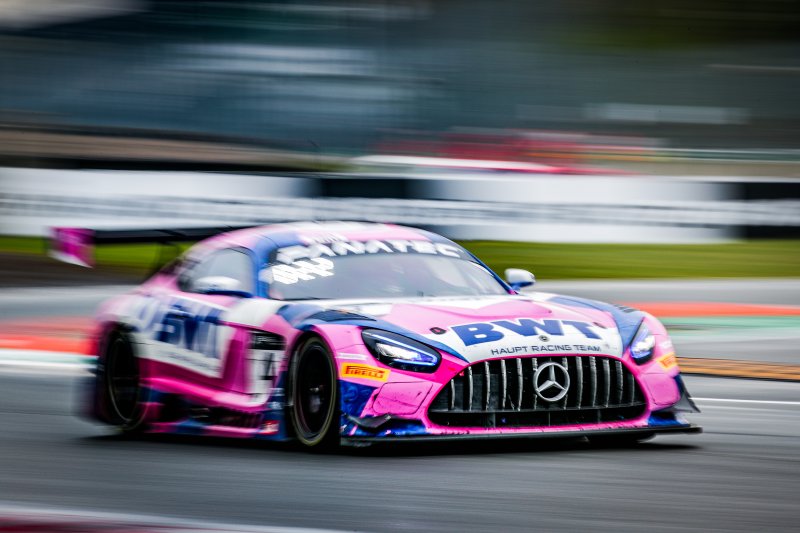 Still running with wets on a drying circuit, the Italian ace had soon moved up to third behind a pair of Mercedes-AMG cars at the head of the pack. The #4 HRT machine led at the start of the second hour after a storming opening stint from Maro Engel gave Luca Stolz the advantage, while the #88 Mercedes-AMG ran second in the hands of Daniel Juncadella.

One of the key moments of the race occurred shortly after half-distance. Leading by a little over four seconds, the HRT squad’s hopes were dashed by a left-rear puncture. This promoted Juncadella into the lead, but Cairoli had closed on to the rear of the #88 and was ready to pounce just as the stricken Stolz entered the pits. 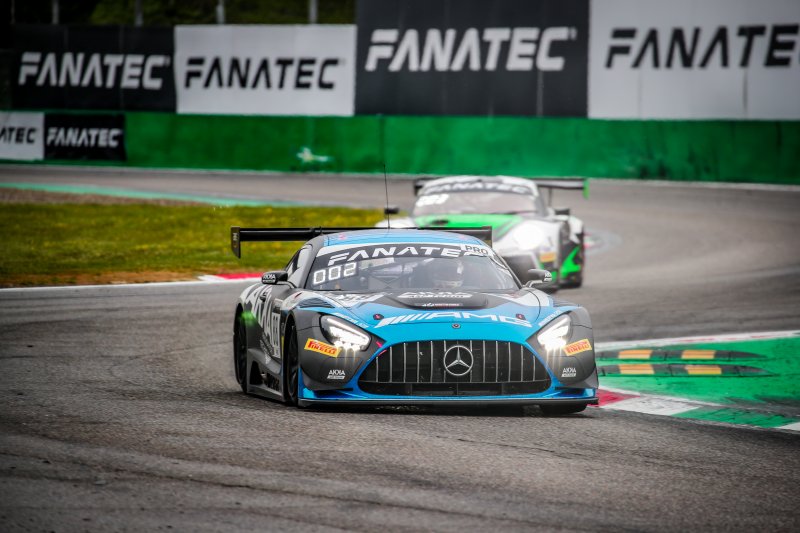 The #54 Porsche was right behind on the run to Parabolica and took full advantage when the Mercedes drifted wide into the sweeping right-hander. Cairoli slipped up the inside and was in front by the time the cars hit the start-finish straight. He then edged away from his rivals before stopping shortly after the two-hour mark. Bachler took the wheel for the final stint, just as he did for the team’s 2019 win, this time fitting dry-compound Pirelli rubber for the run to the flag.

There was still work to do, however, as a safety car with 45 minutes left on the clock bunched up the field and turned the race into a sprint. Bachler had the #88 Mercedes-AMG of Jules Gounon in his mirrors, the Frenchman in top form having set a new Monza lap record in qualifying.

But Bachler had the pace to edge away during the final stint, building a cushion of four seconds at the head of the field. In fact, Gounon was paying more attention to his mirrors as the #14 Emil Frey Racing Lamborghini of Ricardo Feller loomed large and sought to make a move for second. 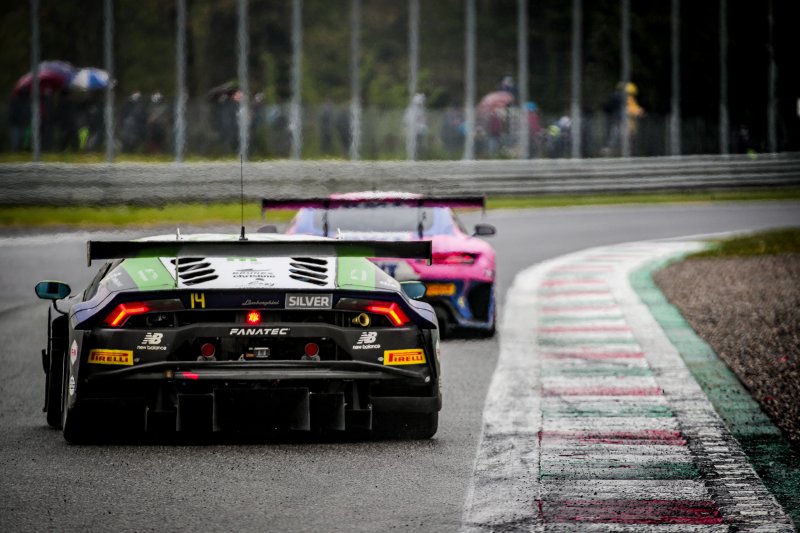 This was a sensational showing from the #14 crew, which runs for Silver Cup honours with the all-Swiss line-up of Feller, Alex Fontana and Rolf Ineichen. Having started seventh overall the team was in a position to challenge for the overall podium at the end and the charging Feller did not give Gounon a moment’s rest during the final half-hour.

Bachler was able to manage his gap at the head of the field and, for the second time in succession, take the chequered flag for Dinamic Motorsport and Porsche at Monza. Behind, Gounon held on to second ahead of Feller, who not only took class victory but ensured that Emil Frey Racing became the first Silver squad to score an overall Endurance Cup podium.

Fourth on the road and also very much in the picture until the finish was the #71 Iron Lynx Ferrari. The car had an eventful race, with Callum Ilott especially busy after taking over from starting driver Davide Rigon. The Englishman switched to slicks earlier than most and made rapid progress when the track dried. He handed over to Antonio Fuoco, who chased Feller until the chequered flag. The sister #51 Iron Lynx Ferrari completed the top-five.

Team WRT was sixth overall and second in Silver Cup after an excellent showing from the #30 Audi of Benjamin Goethe, Stuart Hall and James Pull. The #57 Winward Racing Mercedes-AMG completed the Silver Cup podium with seventh overall in what was the American squad’s first Endurance Cup outing outside the Total 24 Hours of Spa. Belgian Audi Club Team WRT (#31 Audi), Saintéloc Racing (#26 Audi) and the second Dinamic Motorsport Porsche completed the overall top-10.

Garage 59 began its Pro-Am title defence in perfect fashion by taking class honours with a final-stint pass for the win. The #188 Aston Martin made good progress with Alexander West and then Chris Goodwin at the wheel, the latter swapping the lead with Hiroshi Hamaguchi (#19 Orange1 FFF Racing Lamborghini) during the second hour. 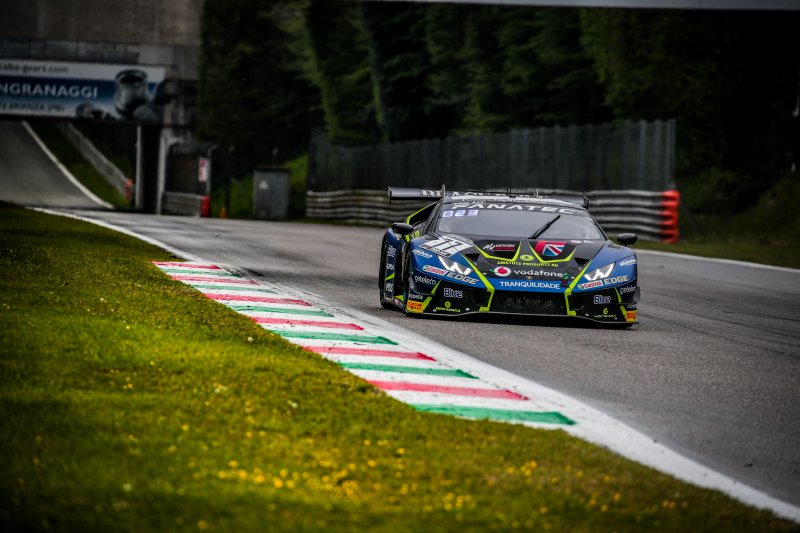 But it was the #77 Barwell Motorsport Lamborghini of Miguel Ramos that led when the final safety car period ended, leaving Aston Martin expert Jonny Adam with work to do in the #188 car. The British racer eventually made his move with a little over half an hour remaining, while Phil Keen also passed the #77 Lamborghini to secure runner-up spot for the FFF Racing squad. Ramos completed the podium in the car he shares with Adrian Amstutz and Henrique Chaves. 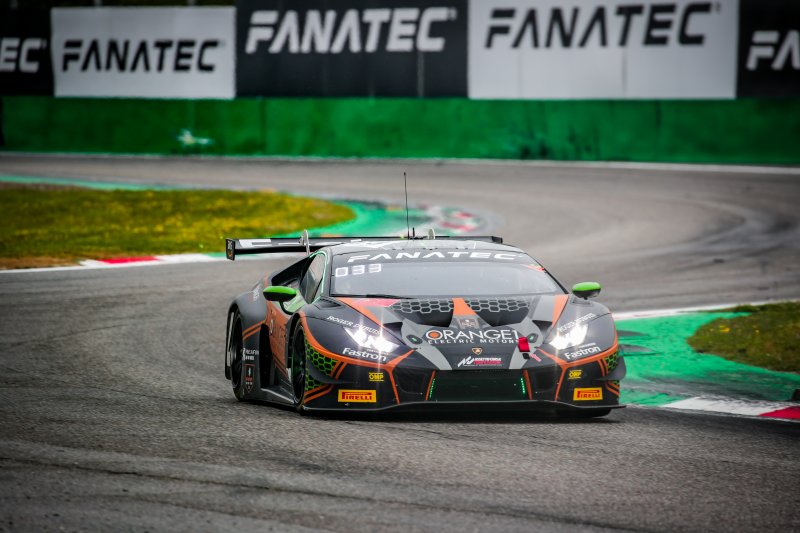 Two leading contenders did not make the finish at Monza. The #63 Orange1 FFF Racing Lamborghini led from the start with Mirko Bortolotti at the wheel, but electrical problems cost the crew a lap after stopping for wets during the first stint. The #32 Team WRT Audi was also in the mix after an excellent opening stint by Charles Weerts, only for second driver Kelvin van der Linde to be eliminated by a puncture while running in second.