SportsCarGlobal.com
Home Fan Zone Historic / Club Racing Historic: Amelia Island Concours D’élégance, Our Pick of the 10 Best.
Share on Facebook
Tweet on Twitter
Now in its 23rd year, the Amelia Island Concours d’élégance has become one of the most prestigious automotive events in the world.  Every year, Bill Warner, who founded the event in 1996, manages to invite a selection of glorious automobiles, unique in its kind. This year, Kristof Vermeulen had unrestricted access and gives us his personal pick of the ten best cars in the show.
This year’s guest of honor was racing legend double Formula 1 World Champion and two time Indy 500 winner Emerson Fittipaldi.  The Brazilian won his fifth race in Formula 1 and became the youngest F1 champion in 1972, at the age of 25, a record that stood for 33 years.  In 1974 he won his second world title, and retired in 1980. A few years later Fittipaldi came back out of retirement to race in the Indycar series, adding two Indy 500’s on his palmares in 1989 and 1993. More on Fittipaldi’s cars at Amelia and other collections showed will follow later on.
More than 300 cars featured this year on the greens of the Amelia Island Golf club, next to the prestigious Ritz-Carlton hotel.  The one more exclusive than the other, including some who haven’t been shown in public for many years. To make a selection out of this massive amount of car culture is almost impossible, but we gave it a try.  Next to both concours winners, we’ve selected 8 other cars who stood out from the crowd. Off course we’ve looked at some Le Mans heritage in some of those, but also a few very unique cars have made our little shortlist.
Best in show, Concours d’élégance – 1929  Duesenberg J/SJ Convertible 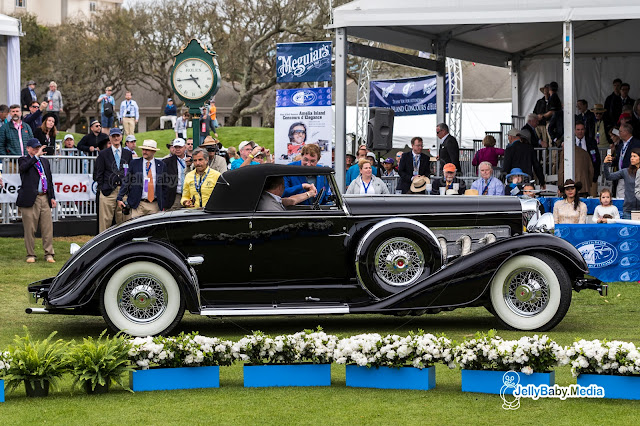 The Duesenberg J was advertised as ‘The World’s Finest Motor Car”. The list of Duesenberg owners was a Who’s Who of Hollywood elite along with captains of industry. No wonder since a bare chassis cost $7,500 and coachwork added another $10,000 to $15,000.  Duesenbergs were built from 1913 thru 1937. Industrialist E.L. Cord purchased the Indianapolis, IN, company in 1926 and hired Fred Duesenberg to design a chassis and an engine that would be the best in the world.
The Model J was introduced at the New York Car Show of 1928. In unsupercharged form, the J produces 276 horsepower from a straight-8 engine with dual overhead camshafts and was capable of a top speed of 119 mph. The supercharged version, the SJ, could do 135-140 mph in third gear; and at a time when the best cars could rarely reach 100 mph.   This car has a Murphy roadster-style coachwork that was restyled in period by Bohman & Schwartz of Pasadena, California. Styling changes included a lengthened hood, slotted fenders and more modern bumpers. One of the early owners of this car was Edward Beale McLean, who owned the Hope Diamond and whose family owned The Washington Post. 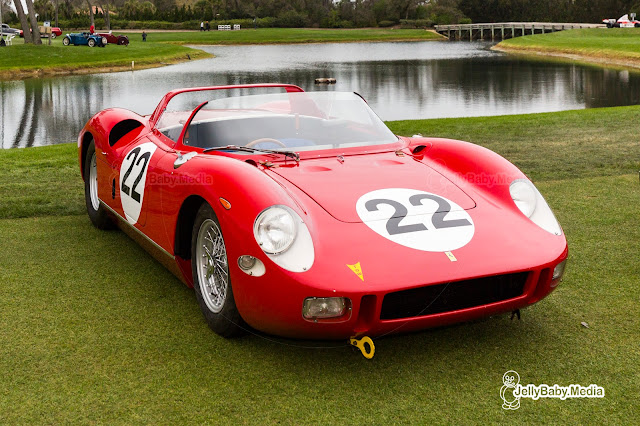 To contest the new World Prototype Championship in 1963 Ferrari introduced its first of many mid-engine V12 powered prototypes, the 250P.  Four cars were constructed with three liter engines. All were factory team cars and immediately successful.  Ferrari entered two cars in the Sebring 12 hour race and finished first and second overall.  They went on to overall wins at the ADAC Nurburgring 1,000Kms and the 24 Hours of LeMans that year taking the 1963 World Prototype Championship. The cars were updated with larger 3.3 liter engines in 1964, now called a 275P and went on to overall wins at Sebring and LeMans again.
This particular car won the 1963 ADAC Nurburgring 1,000Kms with John Surtees and Willy Mairesse and the 1964 Sebring 12 Hours with Mike Parkes and Umberto Maglioli at the wheel.  It finished second at the 1963 Sebring event and won the first race at Mont Tremblant as a NART entry with Pedro Rodriguez driving. The car was campaigned as a NART entry in 1964 and 1965. 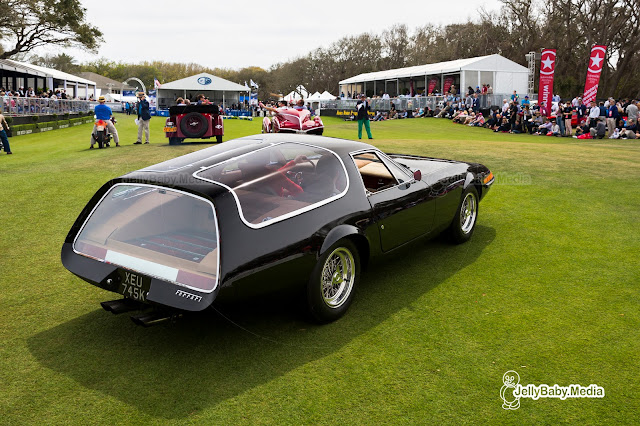 This Ferrari 365 GTB/4 Daytona is a one-of-a-kind built by Panther Westwinds in Surrey, UK. Working to a design by Luigi “Coco” Chinetti Jr. and designer Gene Garfinkle, Panther Westwinds modified this Daytona into a striking and unique station wagon.
Inspiration for this one off Daytona came from the 1961 250GT SWB Breadvan, but this would be a car fit for daily usage. The whole back part of the car has been redesigned  not featuring a rear hatch on the car, instead the curved side windows open in a gullwing style. The boot has been finished with leather and wallnut.  Even the dashboard has been overhauled, relocating the dials to the middle of the dashboard.  The car has done fewer dan 4000 miles up to today and features a 4.4 V12 engine, developing 352 horsepower. 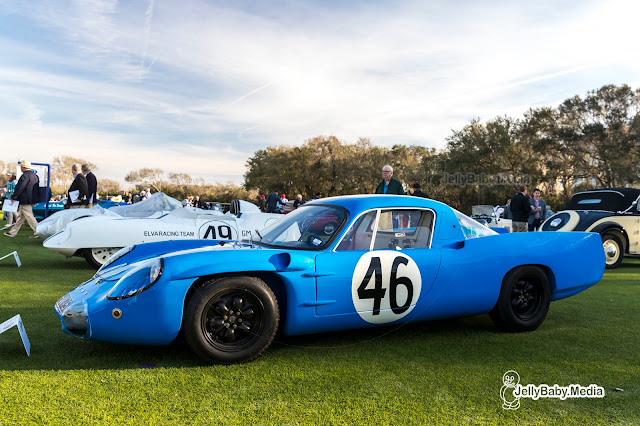 This Alpine M64 with chassis n° 1711 is the third and final M64 which has been built by the French manufacturer. It’s powered by a 1.149 cc, 4-cylinder engine with double overhead camshafts, producing 115 bhp. Chassis 1711 debuted on the world stage at the 24 Hours of Le Mans in 1964, driven by Henry Morrogh and Roger Delagenestre. Starting 36th on the grid, it crossed the finish line on 17th position, winning its class and finished first in the “thermal efficiency” class, for the most fuel efficient car during the race (21 mpg).  A few weeks later, the car also won the 12 hours of Reims and has been driven by Juan Manuel Fangio during a “lap of honour’ after the race.
In 1965 it returned to Le Mans, after being fitted with an Allinquant oleo-pneumatic suspension system. It sadly didn’t finish the race, dropping out in the 15th hour with mechanical problems. After Le Mans 1965 it raced in Reims again (finishing 4th) and at the Cognac Grand Prix before being retired from racing. After its racing life, Alpine retained the car as a prototype for the A210, modifying the rear section of its bodywork. The major adjustments were the addition of its rail fins at the back which allowed aerodynamic testing.  It’s with this additions that the car has been preserved and wonderfully restored. 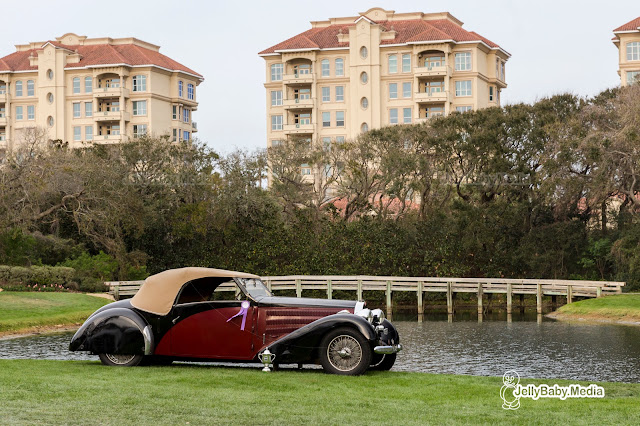 Standing “face to face” with a Bugatti is always a treat.  The timeless state of art design, incredible eye for detail and craftsmanship just shows a demonstration of Bugatti’s genius. Stumbling upon a  rare and unique Type 57 in an almost completely original, unrestored condition, just makes your day worth it.
This 1934 Bugatti is an incredibly original and early example, which has been in single family ownership since 1964.  This Type 57 survived the second world war only because it has been hidden in a barn under a hay stack in France until the end of the war by its original owners.  Eventually the car was sold to the United States, and came into posession of John Risch Sr, who has kept in the family for the last 25 years.
It’s not a surprise this car won the FIVA award for the ‘most well preserved and regularly driven vehicle’. 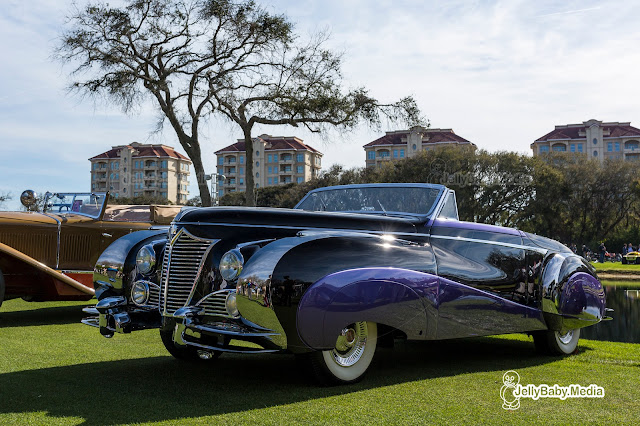 Another unique car, of which only two have been built. Carrosserie J. Saoutchik was one of France’s greatest coachbuilders after the second world war. Jacques Saoutchik was born in Russia before moving to France and becoming one of the icons of French coachwork. Saoutchik was known for his extravagant designs taking many risks with sweeping shapes and copious amounts of chrome.
This car is one of Saoutchik’s final designs, built to order for New York furrier, hotel developer, and art collector Louis Ritter, and one of only 2 cars built on an American chassis by the French carrossier. Ritter was so impressed by Saoutchik’s work that he ordered a second car, based on a Talbot-Lago chassis with a near identical design. It has been restored in the late eighties in its current astonishing black and violet color scheme and kept in a pristine overall condition. 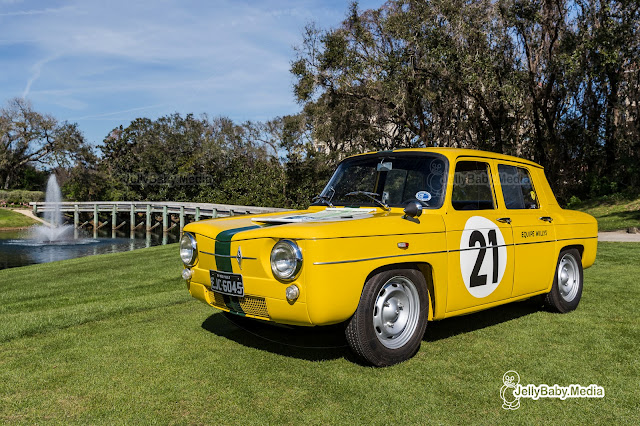 The “cars of Fittipaldi” display showed some impressive race cars, including the black and gold JPS 1970 Lotus 72/5, 1974 McLaren M23/8 and his Penske Mercedes Indycar winner.  One car stood out though: that bright yellow Willy’s Team Renault R8 Gordini. In fact, this was the car in which Emerson Fittipaldi won his first ever career race.  This car is fitted with a 1310 cc overhead-valve 4-cylinder engine developing 103 horsepower.  Coupled to a 5-speed manual transmission it was capable of 112 mph.
It was November 7th, when Fittipaldi won the 4th stage of the Carioca Championship near Rio de Janeiro. This R8 Gordini ran until 1967 and underwent several modifications over the years.  It eventually returned to being a street car until it was bought by collector Mauricio Marx. When he heard Fittipaldi would be the guest of honour at Amelia this year, the car has been restored to its original state in a ver short time. 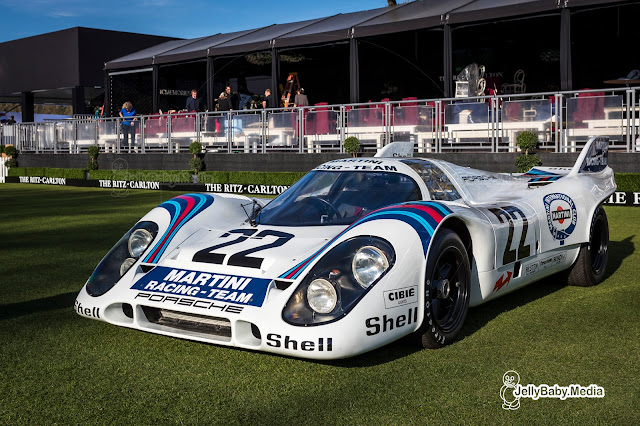 This 917K has been brought over from the Porsche Museum in Zuffenhausen and is the winning car of the 1971 Le Mans 24 Hours.  Driven by Gijs Van Lennep and Helmut Marko it covered a distance of 5.335,16 km with an average speed of 222,3 km/h, two records that would last for 39 years.
Flying the Martini Racing colors, this Porsche featured new “shark fins” at the rear, seen for the first time at pre-race tests in April of that year.  These gave the 600 hp race car more directional stability and reduced drag.  In true Porsche style, it won the “Index of Performance”, an award for the most economical ratio of fuel consumption to displacement.  However, even the drivers were not aware that their 917 was the first Porsche to race with a magnesium space frame.  The material is considerably lighter than aluminum.  This 917 is so light that the engineers fit a 55-liter oil tank and only then did reach the 800 kilogram minimum weight.
The car’s race career was brief and meteoric. Completed on June 5, it ran 552 practice kilometers at Le Mans.  Victory marked the end of its race life. 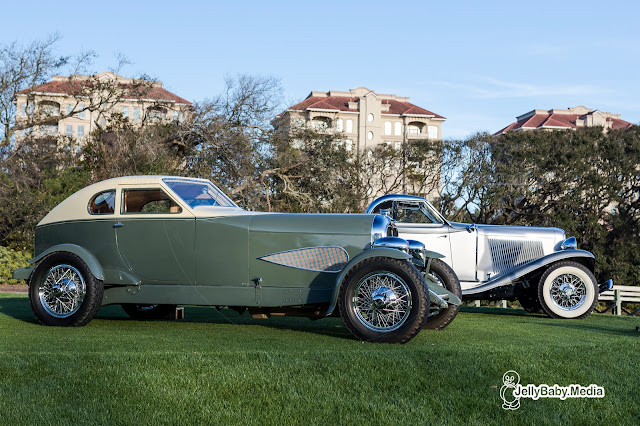 Auburn was an American premium automotive brand that existed from 1900 to 1937.  Production ended in 1937, following the great depression after which the cars became too expensive for the market.
This 1929 Auburn Cabin Speedster was recreated in 1983-85.  The original one-off  prototype was destroyed in the Los Angeles Automobile Show fire on March 5, 1929.  The chassis is constructed just as the original  using components from production 1929 Auburn Automobiles.  It is cleverly constructed from the rear portions of two frames with the rear portion inverted.  The result is a six inch drop compared to the standard 1929 Auburn.
The unique body is built with an ash frame covered in aluminum, using the original full size body drawings saved by Auburn Historian Randy Ema.  The Cabin Speedster accomplished Auburn’s goals for marketing aerodynamic cars, even if the aero was more about form than function.  The glamour and excitement of the period can still be felt in the design, even 90 years later. 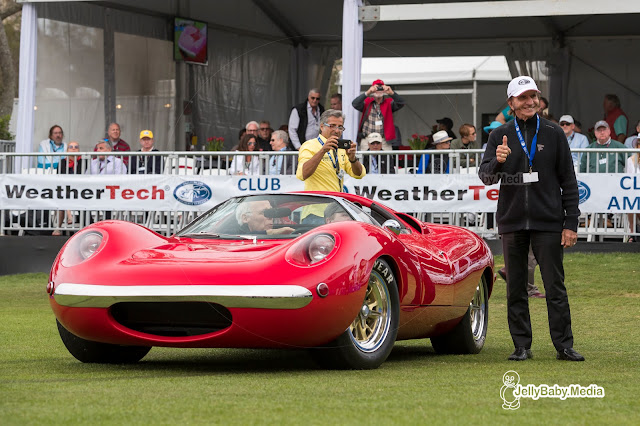 The sole Shelby Lonestar was created in secrecy a half-century ago as a a replacement for the legendary 427 Shelby Cobra. Based on a modified Ford GT40 chassis the Ford V-8-powered mid-engine coupe was assembled in England during 1968 and wore the name  “Cobra III” in internal Shelby documents. The aluminium body had the same drag coëfficient of a modern Ford GT and performed strong with its 289 V8 engine.
The Cobra was a very hard act to follow but the Lonestar checked all the right boxes and Shelby had a potent plan.  But there  were considerable obstacles: Ford had acquired the Cobra name a year earlier.  So Shelby, a Texan by birth named his third-generation “Cobra” after his home state and the Shelby Lonestar was born. In the end U.S. safety legislation halted the budding project, the car not passing some of the crash and smog standards for smaller manufacturerst.  A disgruntled Shelby left for the wilds of South Africa.  The Lonestar was advertised for the then princely sum of $15,000 and was eventually sold. After a sensitive and complex ten-year plus restoration, Shelby’s only Lonestar made its international debut at Amelia.
themes free download