Every cloud has a silver lining! And it has been a rather moist, cloud-ridden day around Le Mans. However that has given us time to review some data, analyse a little bit and possibly draw some conclusions.

For what it is worth below are the first 15 rows of the grid, with the #18 Porsche 919 of Neel Jani taking pole with a much heralded time of 3:16.887. Beyond that it is very much a two-by-two affair with Porsche, then Audi and Toyota followed by Rebellion Racing. Of course in a 24-hour race much of this is irrelevant, but it has been fun to see the cars ‘pressing-on’ around the circuit, and as per the WEC rounds year to-date it is Porsche that has the fastest single lap pace. 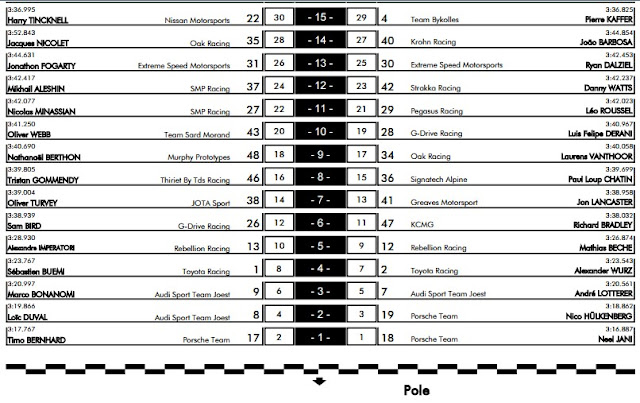 First surprise comes at the speed trap. The season so far has been dominated by  the straight-line speed of the Porsche 919 Hybrid its 8mj of regenerative power allowing it to pull quicker coupled with its advanced turbo geometry to Vmax above its competitors at the Paul Ricard Prologue, and along the Kemmel straight.

However, it is clear below that Audi’s private testing at Monza (and likely elsewhere) has led to a hugely slippery and powerfully efficient car with both the #7 & #9 steaming to the top of the charts ahead of the Porsche.

Also, how wonderful to see the #13 Rebellion Racing AER turbocharged R-One showing its pace, lets hope that new car niggles do not get in the way of a superb return from this premium LMP1 privateer outfit.

In all of this there are the Nissan GTR-LM Nismo’s which with limited power have delivered straightline pace. Out around the circuit they do look a handful, but we must remember this is the team’s debut, and as such a finish should be their realistic objective. They do need to develop the car substantially, and come back much stronger and more focused next year. An intriguing car all the same.

When we look forward to the race, there is limited data to be relied upon. I have taken the best 18-lap average for each LMP1 car (where sufficient data exists) from the final Qualifying Practice as some form of guidance.  The numbers are below –

The conclusion we can draw from this I draw is clear, the masters of the past 15-years whom have ‘welcomed challenges’ are on top form.  This should not come as a surprise, they have come out on top at both Silverstone and Spa, but Le Mans is a special, unique challenge.  Two Audi R18s appear to be able to run at a 3:22 pace against the 3:23s of the 919s. It will take superior strategy from Porsche potentially through economy to overcome that, but we are already aware that the R18s are extremely ‘light on their loafers’ and able to multi-stint tyres beyond the tyre-shredding power of the 919s.

It will be fascinating to see competing race strategies play out for cars with distinctly different solutions to the race.  Expect to see the 919s making comfortable passes on the straights, whilst the R18s appear to have great performance in Sectors 1 & 3.  I’m making special efforts to go through the night with minimal napping, and I suggest where ever you are you do likewise. We may see the race of a generation start on Saturday 12th June, and it will take a considerable time to settle down, indeed it could all come down to that final hour on Sunday afternoon.

What a wonderful way to spend a weekend in June 🙂

See you all trackside, one way or another !