Williams got off to a bad start in free practice this morning at Silverstone , what started off as a big morning for Williams with Susie Wolff’s long-awaited grand prix début, making her the first female in over 20 years to drive a car and only the 6th woman ever, ended sooner than she had hoped on the opening session of the British GP. 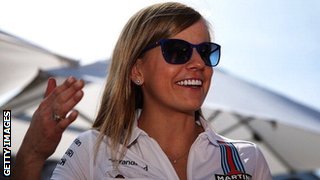 After only four laps in FP1, only one of which was a full flying lap, Susie’s car slowly came to a halt and stopped in the run-off area at Vale corner. It is believed that an oil pressure issue caused the Mercedes powered FW36 to shut off its engine.

“It’s a pretty terminal problem,” Wolff told Sky Sports F1 after returning to the garage to discover the bad news. “But I hope the guys get it ready for Valtteri [Bottas] in P2.”

What was supposed to be Susie’s big day turned into a disappointing  one through no fault of her own, although she remains positive and said

“It felt so good out there, As much as there has been a lot of media scrutiny about me running, ultimately when I am in the car that is the best feeling. It was only one and a half laps but I’ll look forwards to more laps in Hockenheim.”

“It wasn’t my day today, but I’ll keep my head up and working hard and make sure that in Hockenheim it will be my day.”

Susie will return to the car for FP1 testing in Hockenheim at the German GP in two weeks time., lets hope she has more luck with the car there.

The session was one that Williams will be hoping to put to the back of their minds after Massa crashed heavily after running wide at stow and catching the curb, causing him to spin off into a tyre wall, this caused the red flag to be issued while driver and car were recovered.